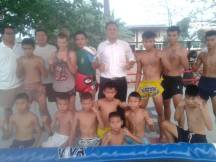 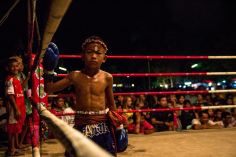 Every time I run.
I see them right next to me
Or in front of me.
Pushing me to go further
with their warmth and quiet strength.

It’s hot.
Sweat runs from my pores gasping for water.
The big, bright incubator in the sky is cranking itself up as high as it can go.
Clouds have abandoned us
in search of a cooler atmosphere.
The pavement moves under my feet,
I don’t really know how.
I stopped understanding how my body continued to function
miles ago.
Two figures move in the distance,
taunting the rest of us.

How do they move so fast?

School shoes pace themselves on the pavement,
Finding a rhythm unheard.
I’m sandwiched between two pairs, the twins,
gaining quickly on one in front of me.
He smiles as glance over my shoulder at him.
Soon I would see that smile bounding around the ring in victory
After scrambling up his opponent to finish the bout with a spike elbow.
I’ll lose my favorite sweatshirt to the one behind me,
a loss I am happy to have.
But my eye is on the speed demons in front.
They’re gone from sight, probably relaxing in the shade waiting for us to catch up…
Just to take off again.
I pass the twins.
Such a dangerous duo, but here, now, running with them,

We turn the corner in a disjointed pack and I can see the two upfront.
They see us and speed up to get to the gym first.
I chase them.
I go as fast as my Nike’s will take me-
Past the bus station filled with people milling around waiting for the buses that are rarely on time,
Past the school that’s been let out an hour before,
Past the one room apartments with doors wide open letting the Thai air circulate through,
Past the Wat that is under construction, but still yields such beauty and grace,
Past the elementary school where kids are playing soccer,
Past the stray dogs who shy away as I run towards them,
Down the straight-a-way meant for sprinting
And I reach the gym a few steps after the kids do.
Good, they say,
Very good.

I look for them when I run.
I chase them every time. 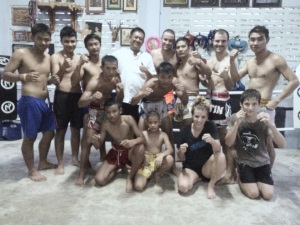 A friend of mine, Ben Covan, is over in Thailand living in the same city I was. He’s teaching at a local school and training at the same camp, Keatchatchi. He’s started an amazing campaign to raise money for the camp. Spread the word and send some love! It is such an amazing camp, a true family. Their kindness knows no end and I am grateful I was able to spend the time with them that I have. I cannot wait to visit in the future!

Most of the photo cred goes to Ben, except for the ones I’m in and the banner. He’s a great photographer and has really been able to capture Thailand with just a click.